Olympic gold medalist Kerri Walsh spent the summer traveling on the international beach volleyball tour, earning titles and prize money and, not least of all, points that will help her and partner Misty May-Treanor qualify for the London Games.Now she finally gets a chance to play on the domestic sand.

Walsh and other top Americans will play for a share of a $100,000 purse at the championship of the National Volleyball League in Miami Beach, Fla., this weekend. Because of the bankruptcy of the domestic pro tour last summer, it will be the first U.S. competition this year for Walsh and fellow Beijing gold medalist Phil Dalhausser.

“My first time in a long time,” Walsh said in a telephone interview on Friday. “Anyone’s who’s supporting beach volleyball is dear to my heart. We kind of hit a rough spot last year, and we’re going to do whatever it takes to get our sport back on top.”

Among the others competing in the event are April Ross and Jen Kessy, the No. 2 American women’s team on the international tour.

“It’s really nice. We’re actually on a real beach right now, which is cool for beach volleyball,” Kessy said. “Just to be in front of people that haven’t seen us play and been supporting us through the years. It’s exciting for them, too. So we’re really happy.”

The bankruptcy of the AVP last year left top Americans with no domestic tour. Most turned to the FIVB circuit, where they can earn money and points toward Olympic qualifying at the same time. (The national governing body, USA Volleyball, had proposed a trials tournament to decide the Olympic competitors but last month dropped that in favor of the existing FIVB points system.)

“All of us are pretty happy with the outcome,” Ross said. “We’ve worked so hard and played against the best in the world for so long. Knowing that it’s going to count for our Olympic qualifying is a relief.

“At the same time, it puts a lot of pressure on the events next year. We’re going to have to kick butt for another year.”

The international tour limits players’ opportunities to compete in front of their American fans. But they aren’t ready to give up on the idea of a domestic tour that will help the sport grow in the U.S.

The NVL is one of three tours that cropped up to fill the vacuum left by the AVP’s departure. Founder Albert Hannemann is a former pro who said his goal is to unite the beach volleyball community.

“It was a little bit of a transition in the beginning and we built a little momentum with fans, players and sponsors. We’ve got a lot of momentum now,” said Hannemann, who noted that this week’s tournament will be broadcast as part of a one-hour show on FOX on Sept. 25. “We’ve got a lot of things going here, and it’s beautiful.”

Copyright 2011 Associated Press. All rights reserved. This material may not be published, broadcast, rewritten, or redistributed. 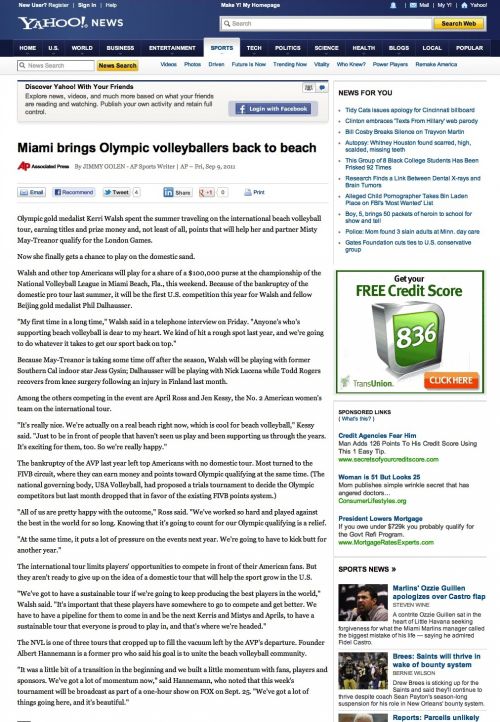