For a fledgling beach volleyball tour in need of attention, the National Volleyball League is content for now to tie its fortunes to bigger events.

Making its first stop of the 2012 season at the Preakness Stakes, the NVL is hoping that fans at the Triple Crown horse race will check out the beach volleyball tournament in the infield and become supporters of the sandy sport. Then it is counting on the Olympics to bring the sport even more attention.

“Once we get them to see what we’re doing, they become fans,” said NVL founder Alb (pronounced AL’-Bee) Hanneman, who also held an event at the Pimlico racetrack last year. “It was our coming-out party. It went so well we couldn’t wait for this year.”

The United States has been without a cohesive professional beach volleyball tour since the AVP went bankrupt in the summer of 2010. Top U.S. players are hoping the NVL can fill the gap, providing a domestic option to compete with the international FIVB tour while helping the sport grow in this country.

“It’s nice to be able to whip out my driver’s license instead of my passport to go to an event,” said Beijing gold medalist Todd Rogers, who hasn’t played in a tournament in his home country in almost two years. “It’s been a long time.”

Several tours have popped up in the absence of the AVP, with differing rules and differing vibes. Hanneman has the advantage of knowing the players, having spent time on the AVP, and knowing what they want.

“I’ve been friends with them, played with them for 18 years,” Hanneman said. “It gives us a lot of credibility to have some of the biggest names support what I’m doing. I’m very grateful that they would take the time to come out on their only weekend off and come play in an NVL event. It means a lot to me.”

In addition to Rogers and his teammate Phil Dalhausser, who have qualified for London, 2012 Olympians April Ross and Jen Kessy will compete in Baltimore this weekend. The event begins on Baltimore Beach near the Inner Harbor, with the finals on the infield at Pimlico in the afternoon before the Preakness.

“The fact that Alb stepped up and created a tour out of nothing when the AVP folded helps beach volleyball survive in the country,” Ross said in a telephone interview from the event.

“The Olympics, obviously that’s a life-long goal and to have qualified is amazing. But to come back after representing the United States in the Olympics and get to play in front of U.S. fans live is going to be totally second best.”

Dalhausser said he’s noticed fewer young Americans coming up the ranks. For one thing, it’s harder for them to break into the competitive international tour.

“It’s important to have a strong domestic tour to develop the young players, to bring the fans out,” Dalhausser said. “The youngest players on the world tour are like 30. There are no young and up-and-comers.”

The NVL is hoping to solve that problem.

“I’m sleeping a lot better right now,” Hanneman said. “I don’t want to jinx myself, but these guys game in big and I’m glad all the hard work is paying off.”

The goal last year, when there were four events, was to build momentum going into an Olympic year. There are six events planned for 2012 — two before and four after the London Games.

Hanneman said he wants to get to 10 or 12 next year; the AVP had 22 in its heyday, and that’s on Hanneman’s radar as well. The tour also has 26 collegiate events, which Hanneman said fits with the tour’s commitment to grow the sport from the grassroots.

“But it’s all got to make sense,” Hanneman said. “The Olympics is going to magnify everything. The world wants to know what our Olympians are doing. We understood that. We want them to be there to celebrate with them.

“But we’re making sure that we’re promoting all of the athletes, because we have to build the entire sport. It’s a chance to help them build their name and build their own brand. That’s my goal: to have something that’s going to be around for a long time.”

© 2012 The Associated Press. All Rights Reserved. This material may not be published, broadcast, rewritten, or redistributed. 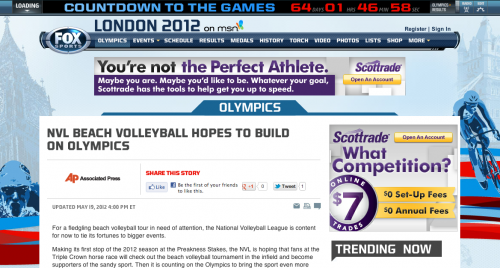