By Tarin KeithAugust 26, 2015Between The Lines 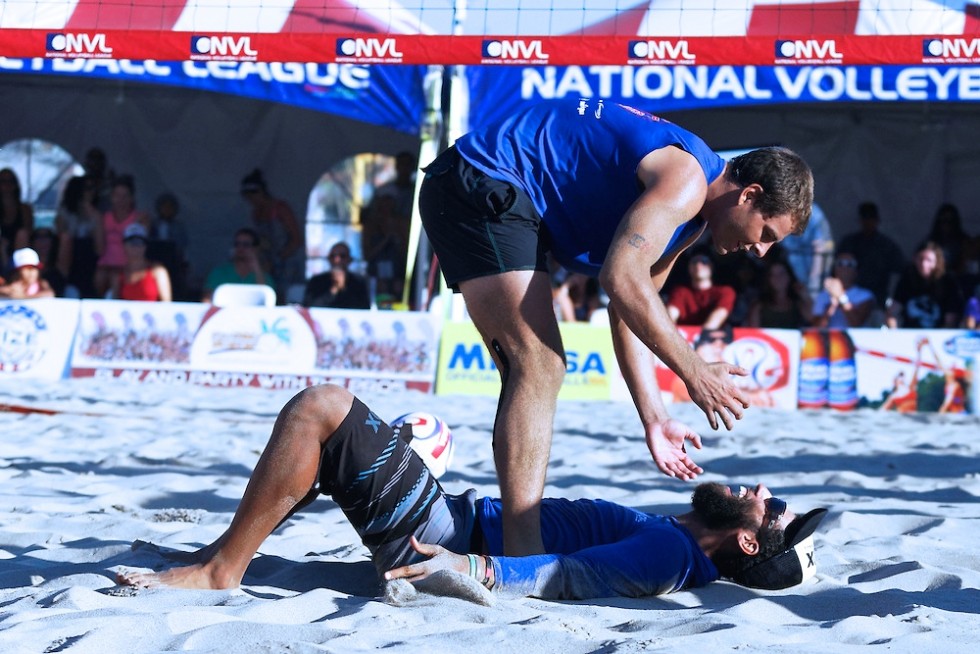 The final teams and seeds are set for the 7th event of the 2015 NVL professional beach volleyball tour.  The suspense is greater than ever as teams are vying for the final spots in the eight team Players Championships scheduled for September 25-27 in Port St. Lucie, FL.  Whether you are a hard-core volleyball fan or just love the amazing NVL action, the match-ups deserve some serious analysis.

The depth of the competition is incredible.  No team has been able to repeat as champion in the first six events.  Only Dave Palm has tasted the champagne more than once, winning with Mike Placek (Panama City) and again with Eric Zaun (Hermosa Beach).  Every event has been a surprise and you can bet big money Seattle will be no different.  Here are the top 12 seeds:

Dave Palm and Eric Zaun are coming off a three game championship win over Piotr Marciniak and Skylar DelSol in Hermosa Beach earlier this month.  Eric Zaun has certainly put his defense together and seemed very comfortable in the deep Hermosa sand.  Whether these guys can repeat depends less on them (because they are playing so well) and more on whether the other teams can strengthen their games.

Hermosa was the first event for the new team of Piotr Marciniak (Madeira Beach champ) and Skylar Del Sol (two finals appearances so far in 2015).  They had some growing pains early on in Hermosa, but they improved with every match.  Piotr and Skylar could be really tough in the shallower Seattle sand and as they get more comfortable playing together.  These are two very smart players and they are capable of making any adjustment needed to win.

Travis Schoonover and Andrew Russell (Ohio champs) continue to be one of the most underrated teams on the tour – maybe on the planet.  They have an exceptional in-system offense that’s not flashy, but can stymie even the best defenders.  Their defense features great technical blocking and the extreme athleticism of defender Travis Schoonover.  Their Achilles heal may be the blocking of Jeff Samuels who seems to always find a way to step his game up late in their matches.

The new team of Jeff Samuels and Mike Placek took an impressive third in Hermosa and at times, they looked like the best team on the beach.  They are going to be very tough to beat if they add some consistency.  Mike is a great defender and strategist.  Jeff still has enormous untapped potential and every time he hooks up with a new partner he gets even better.  His fiery attitude and fierce competitiveness makes for some entertaining moments on the court.

Jon Mesko and Mike DiPierro (Milwaukee finalists) had a very tough draw with losses to Palm/Zaun (in 3 games) and Marciniak/DelSol (two finals).  This is a very tough team and they play their very best ball more consistently than most of the other teams.  If the opposing team shows any weakness, these guys will find it and exploit it.  They had a big win over Mark Williams and Skyler McCoy in Hermosa (Mesko’s home beach) and they always have a good chance to upset a higher seed.

Mark Williams and Skyler McCoy (Milwaukee champs) have run into hot teams in the last two events.  After beating Mesko and DiPierro in Milwaukee, they have become a problem for Williams and McCoy in the last two events.  They need to find a way to beat them again.  The shallower Seattle sand will certainly make them a much tougher team as McCoy gets most of the serves and the added height on his jump will open up more court.  McCoy’s enthusiasm and his ability to connect with the fans makes him a fan favorite.

Defender Drew Mallin has teamed up with huge blocker 6’10” Ryan Vandenburg after having some very good results with other partners.  It appears that Drew can find ways to win with just about anyone.  Drew has a big hitting window and his ridiculously good defense is going to be even better behind this monster blocker.  This team is going to earn a lot of points on defense. Expect to see Drew get most of the serves.  If Ryan can set him, they are going to be really tough.

Matt Henderson (Madeira Beach champ) is back after missing Hermosa and has joined forces with Phil Burrow (nice run through the contender’s bracket in Hermosa).  Phil has gotten better every event and has improved more than any other player this season.  Matt knows how to compete and win against the best teams.  He is a very tough defender.  The big question is how much more can Phil improve and is he ready to match up against the more experienced teams?

Martin Caban and Gregor Lah (Ohio finalists) are probably the toughest team to read.  They had a break-through performance in Ohio and a couple of good wins in Hermosa before being eliminated by Marciniak and DelSol.  The sand in Seattle will certainly suit them better.  They will need to be consistent if they expect to go deep.

Drew Hamilton and Daniel Lindsey have also struggled to be consistent.  They are as good as any other team at finding ways to earn points on defense.  At times they look unstoppable on offense and then tend to struggle for a stretch of points.  These guys are a land-mine that can probably beat any team at any time.  Look for a stronger performance from these guys if the conditions in Seattle get iffy.  They are two of the best athletes on tour and will be fun to watch if the weather turns.

Brandon Joyner (best 2015 finish – 5th) has his third new partner for the season in Will Robbins.  It is unclear who is going to play defense.  Both guys are primarily blockers.  But no matter who plays defense, these guys will be fun to watch.  Will Robbins has a linebacker style of blocking and hitting that is very entertaining.  It is great to see him back in the main draw.

Justin Phipps (best 2015 finish – 5th) has a stranglehold on most partners for the 2015 season as he brings in his 6th partner, blocker Petr Doubravsky, in seven events.  Justin is playing his best volleyball of the season.  He was eliminated in the Hermosa contender’s bracket in a marathon 35-33 match against Phil Burrow and Tyler Lesneski.  Justin has the same intensity as Jeff Samuels and if the two of them ever played together, the world might explode from enthusiasm.

Click here to watch the live webcast starting at 10am PST on Saturday, August 29.