By Tarin KeithJuly 13, 2016Between The Lines 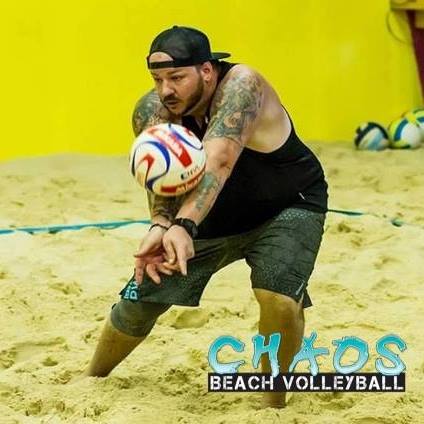 In just a few days, The NVL is hitting the sand at the one and only Flannagan’s Dublin, OH. We had the awesome opportunity of sitting down with Chaos Beach Volleyball founder Corey ‘Chaos’ Robertson. To our surprise, not only is Flannagan’s the hottest sport in Ohio for beach volleyball right now, but it is THE hub for beach volleyball in the entire midwest.

What has beach volleyball done for you?

I grew up in Clearwater, Florida, where beach volleyball was buzzing all around me. It has been my passion for over 22 years. Beach volleyball has done so much for me, from learning about teamwork, responsibility to mental stability and physical agility. When I moved away, due to a beach volleyball-related injury, I found myself in Columbus, OH. To my surprise, Columbus too had caught the volleyball bug – so much so, that I was able to get involved in tournament organizations almost right away. Over the years, I’ve made my own connections and partnerships here, leading to the ultimate development of Chaos Beach Volleyball in 2010. It started as a side project for fun, administering 10 teams or so. Shortly, 10 teams turned into 80-100 men’s and women’s teams per tournament! Beach volleyball is growing in popularity nation-wide, and I am glad to say Ohio is absolutely one of those places, and I am stoked to be a part of it.

Who knew that beach volleyball would find its home in the midwest, with no surrounding beaches! Tell us a bit about your players. 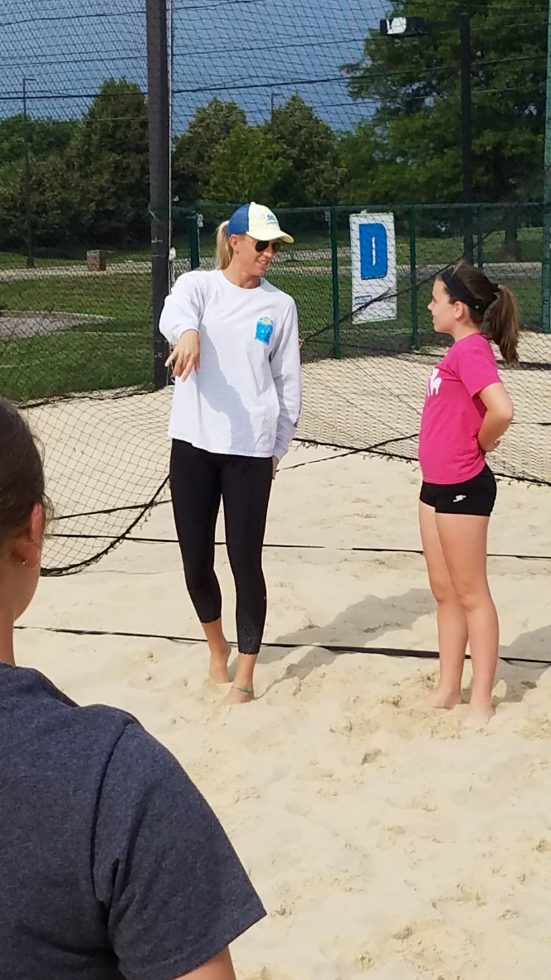 Some of my teams are playing in the major volleyball league qualifiers, including the NVL this upcoming weekend. We can now say that we have sponsored players that are traveling around the country to compete. How awesome is that? This is a league built by the players, for the players – just like the NVL. Our players are super involved and are also helping to promote the growth of the sport and league in Columbus.

Ohio has a slew of great players competing this weekend in the qualifier and even the main draw. Kaitlyn Leary, who will be playing in the NVL main draw with Jules Colina, was a three-time All American indoor player, first at Ohio State University, but transferred to University of Arizona where she was an All American too on the beach side. She also plays in our Chaos Beach Volleyball tournaments. Recently, we had a gold medalist come down to coach a camp, in which Kailyn co-coached. Kaitlyn is a super strong player overall. She is tall, powerful and has her mental game down. When you love the sport that much and play for that long, only good things can come.

As of now, you have not developed a league for the juniors. Is that something we should expect to see soon?

That is correct. We are currently focusing on our adult tour. We are also working on building an indoor beach volleyball facility, right after the NVL Midwest tournament comes to a close. We are also in the baby stages of discussing and building a juniors club and league. That is something I really respect about the NVL: their focus on growing the sport and paying it forward.

How did you get involved with the NVL?

From his days as a pro competitor I’ve known AL-B for 20 years. Back in the day, I had the opportunity to play AL-B…and was defeated! I’ve watched his cousin Eric play in the Olympics and think its awesome that his entire family is involved in the sport of beach volleyball. Watching how AL-B has grown the game, taking juniors to the next level and developing them into the next pro players is what drives us all. It’s what we need to keep the momentum up. During the 2015 NVL season, we reconnected at the Beach Water Park stop in Ohio. I knew I wanted to get involved in any way possible. Unbeknownst to AL-B, Flannagan’s owner David Straub and I drafted a proposal to bring the NVL to Flannagan’s. Sure enough, we pitched it to him and we went through with the plan. It’s another check off my bucket list to be able to host an event like this.

We see the sport growing on a national and even global scale. How has this affected Columbus in particular?

I was recently speaking with the Greater Columbus Sports Commission and discovered that Ohio is one of the largest indoor tournament cities in the nation! We host more events than most other big volleyball cities thanks to our awesome convention center. The midwest and Ohio is deeply rooted in volleyball, starting with two facilities which has quickly turned into several facilities in a ten year span. As the popularity for the beach has grown, we are happy to say that Flannagan’s Dublin has been one of those trend setters. Other surrounding businesses realized this and began to catch on. The crazy part is the demand for the sport; People are dying to get out and play. Adults, juniors, professionals and leagues – it’s one of those sports that everyone can enjoy for fun and more recently for a living. Watching it become an Olympic sport and now a collegiate sport, we are seeing it everywhere. Ohio is proud to be one of the founding locations. 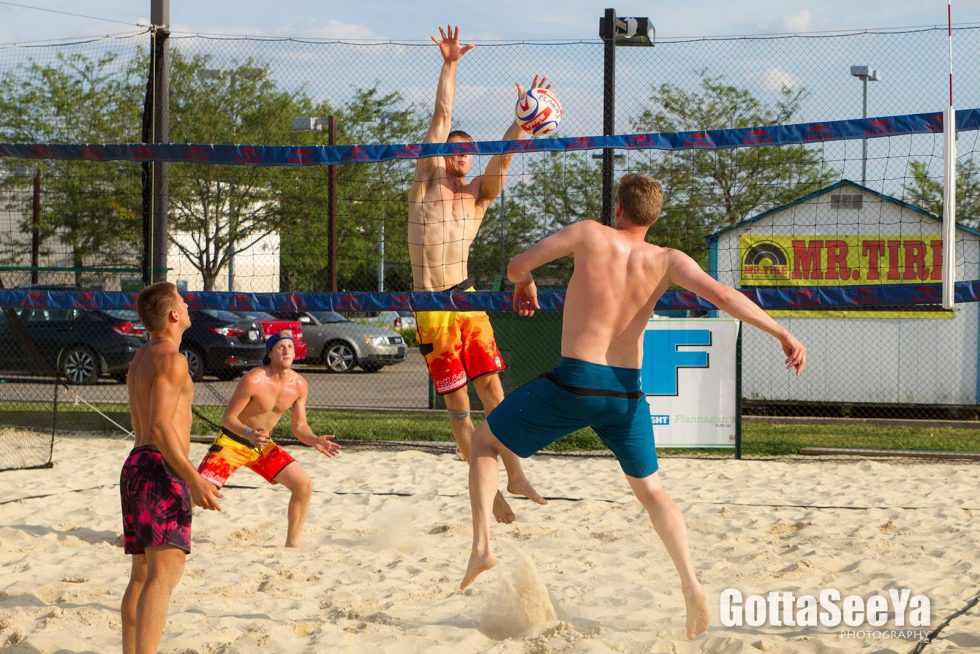 This season, we’ve been discussing the mental aspect of the sport during our interviews. Is this something you focus on with your players?

We are more of a league than a club, but we do offer coaching at different capacities. I’d say we focus on the mental game just as much as the physical game – especially when it comes to beach. Beach volleyball is much more of a cerebral sport. As players, we value chemistry over strength. Out on the court, it is just you and your partner and there is no one else you can rely on but yourself. Therefore, mental stability and team chemistry is at the top of the list.

You mentioned that Flannagan’s is a trend-setter. What differentiates this venue from some of the surrounding venues.

First and foremost, Flannagan’s has 13 courts. We are capable of hosting large events and large leagues. Additionally, it is jam packed with entertainment. Aside from volleyball, Flannagan’s offers an awesome pool with a swim-up bar and we occasionally do large beach party style concerts. We are a multifaceted entertainment complex with a heavy focus on beach volleyball.

Who are you most looking forward to watching at #NVLMIDWEST?

Lately, I’ve been following Dave Palm and Eric Zaun. I am excited to see where the competition will take them this tournament. Of course, Jeff Samuels is a friend of mine as well and I can’t wait to see where he goes this season playing with Travis Schoonover. He will always have my support. Not to mention, I also grew up playing in Florida with Justin Phipps. Another fun guy to watch compete.

What do we have to look forward to here after the NVL tour leaves?

I have two stops left on my tour this season, one of which is the weekend right after the NVL tournament. It is actually going to be an 80’s-themed tournament. Don’t get me wrong though – we have fun but this is very competitive. There will be some high-level players coming down for it that play for the NVL and the AVP along with all of our #teamchaosbeachvb sponsored athletes/teams. We are hoping that some more of the NVL pros stick around for it! 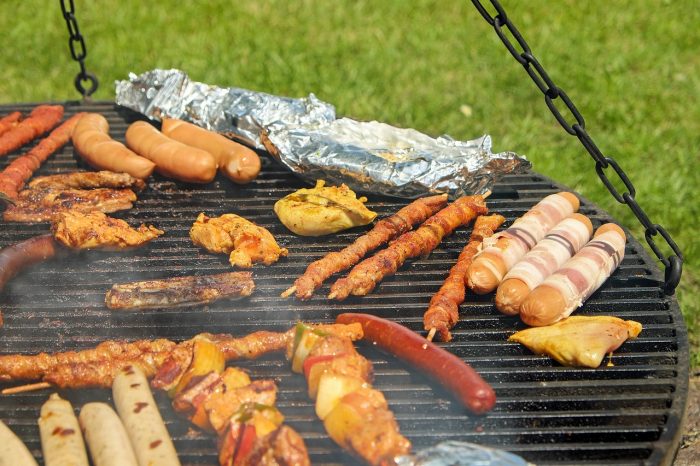 It’s Not Bulking Season… But You Can Still Enjoy A Summer BBQ Cookout AND Win Your Next Tourney!

It’s Not Bulking Season… But You Can Still Enjoy A Summer BBQ Cookout AND Win Your Next Tourney!