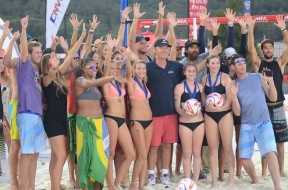 “We are the first league to bring pro beach volleyball to the new LakePoint Sporting Community and it’s been an exciting opportunity to demonstrate to the local fans what the NVL is all about – elite competition surrounded by a family-friendly beach atmosphere,” said NVL Founder & CEO Albert Hannemann. “Pros, amateurs and juniors were able to showcase their talents in an amazing setting while furthering our mission of growing the game and engaging fans.”

All of the Atlanta matches are available to view free on-demand on the NVL Network.The Atlanta tournament was held from June 12-14 and featured many of the top pro beach volleyball players from around the world, competing for a $25,000 prize purse. The weekend concluded with the NVL’s “Saturday Night Lights” format, which included evening finals and a beach party. Music artist Kelley James, the official voice of the NVL, performed for fans and players.

The tournament is one of six professional events on the NVL calendar in 2014.  The remaining events include: